Home » Career Change » Software Tester’s Role – Part 2 – Why do we need to test?

Software Tester’s Role – Part 2 – Why do we need to test?

Written by GIE IT Training

If you have ever used a PC, laptop, or smartphone of any kind, then you must have noticed defects on it. Maybe it was a typo on a website, a broken link, an obscure error message or even an application that crashed. Whether you blamed yourself for the problems or yelled at the device, it’s more likely that defects in the software caused these problems. The fact that you noticed them means that they slipped through the fingers of all those involved in delivering the system, including the programmers and the testers. It would take a tremendous amount of effort to find all or even most of the defects, and that would make the software you buy more expensive. Sometimes, it’s worth testing more – for example, the software used to fly commercial airplanes, when a defect can be life threatening – but most times it simply isn’t.

Testing is also a financial decision. The table below clearly shows how the cost of fixing a defect increases if not found early enough.

Let’s take cars for example. As mentioned in our previous article, cars also use software. Whether that software is used to help us navigate to our destination safely or allows us to brake and steer at the same time without skidding (i.e. ABS – Antilock Braking System) it operates using software. If an issue is found with the car’s braking system before mass-production starts, surely it is cheaper to fix and correct, rather than having to recall , tens or hundreds of thousands of cars to be fixed (http://news.bbc.co.uk/1/hi/business/8493414.stm). 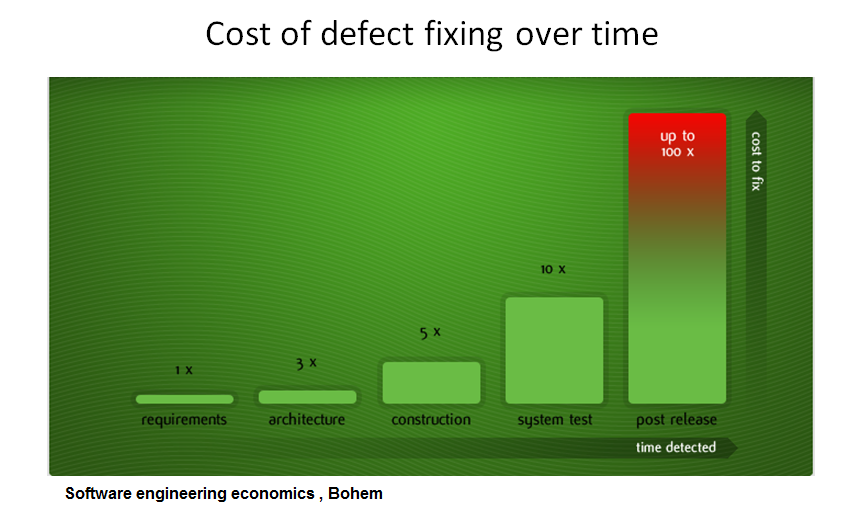 The art of Software Testing is open to interpretation despite being very structured. In our IT retraining course Retrain as a Software Test Analyst you will learn how to make the right decision when putting theory into practise.

As always, feedback is welcome.

This site contains affiliate links. We may be compensated when you click through links on our site.